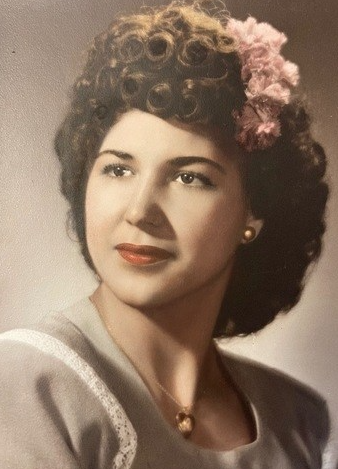 Monterey, CA
Jennie Catania LaSala, 95, passed away in her home, surrounded by loved ones, on June 13, 2022, after a brief illness. Jenny was born May 1, 1927, in Monterey, to Vincent and Mary Catania and lived in Monterey her entire life.
She graduated from Monterey High School. Upon graduation she spent her younger years canning Sardines on the historic "Cannery Row."
Jenny married the love of her life Benny LaSala, and they had four children. She loved being a mom and her children were her world. Jenny and Benny worked side by side managing their businesses; A&W Root Beer in Seaside and Bi-Rite Market in Monterey. After Benny's death in 1984 she continued to run Bi-Rite Market by herself for nearly a decade. A true independent woman, who held true to "old-school" values.
Jenny was a devout Catholic who said the Rosary daily. She was a natural artist who loved to paint. She loved the game of Bingo and her various lunch dates. Jenny's biggest lifelong passion was her love for her family.
She was preceded in death by her parents, Vincent and Mary Catania; her husband, Benny LaSala; her daughter, Angela (John) Cardinalli; sisters, Mary (Ventura) Torrente, Kathryn (Henry) Ragsdale, Angela (Joseph) Frontera, Estelle (George) Brucato; brothers Salvatore (Rose), Frank and Samuel Catania.
She is survived by her brother, Vince (Lynn) Catania; sister-in-laws Melba and Marylou Catania; her children John (Debbie) LaSala of Salinas, Mary Kirby (Paul Rappa) of New Monterey, Vince (Tammy) LaSala of Salinas. Ten grandchildren and fifteen great-grandchildren.
A private service will be held at San Carlos Cemetery on July 1, 2022.

To send flowers to the family or plant a tree in memory of Johanna LaSala, please visit Tribute Store

Share Your Memory of
Johanna
Upload Your Memory View All Memories
Be the first to upload a memory!
Share A Memory
Send Flowers
Plant a Tree