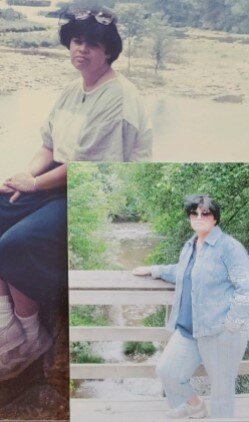 Jackie Little was born March 8, 1945, to Motor City workers Irene and Harold Acton. After graduation she moved to Arizona, via the back seat of a Honda motorcycle. On her way, she attended the Kent State Vietnam War protest. Jackie’s chosen profession was beautician. When Bill met Jackie, she was working as a beautician in Pacific Grove and had a night job on Cannery Row in a souvenir shop above the carousel. After knowing Bill’s daughter Aimee for one week at Christmas, Jackie demanded that Aimee move to Rancho Cordova. May 16, 1981, Jackie married Bill at Mather AFB, Rancho Cordova just in time to catch a plane to NATO Air Base Geilenkirchen, Germany. After four years all moved to RAF Mildenhall, UK. Here Jackie found her way, getting involved with the chapel program singing the Messiah, with daughter Aimee at the Ely Cathedral, in the Cambridgeshire, UK. Jackie also became President of the Enlisted Wives Club and joined Beta Sigma Phi. While in England Jackie struggled, as all mothers do, sending her daughter off to college to UC Davis. Six years later Jackie and Bill came home to Vandenberg AFB for one year, retiring from the Air Force after 24 years and relocated to Seaside, CA. Here she enjoyed being a wife, mother, grandmother, great-grandmother, friend, and faithful church member at Church of the Oaks. In recent years Jackie became ill with two types of cancer, finally having a stroke, which took her home to be with God. Jackie is survived by her husband Bill, daughter Aimee (Jeff), grandchildren Mackenzie (Christopher) and William, great-grandson John, sister Pam, and many cousins, nieces, nephews, and friends who love her. Her greatest joy was her grandchildren and great-grandchild.

To send flowers to the family or plant a tree in memory of Jacqueline Little, please visit Tribute Store
Tuesday
12
October

Share Your Memory of
Jacqueline
Upload Your Memory View All Memories
Be the first to upload a memory!
Share A Memory
Send Flowers
Plant a Tree