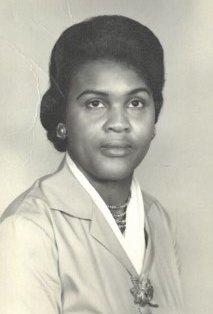 Earnestine Woodford passed away peacefully at her home in Seaside on Monday, April 26 2021 at the age of 87. Earnestine was born in Strong, Arkansas to Robert and Fannie Ward, migrating to Seaside as a young military wife in the early 1950’s where she immediately found her lifelong religious home at the Hays Christian Methodist Episcopal Church of Seaside California. Earnestine enjoyed singing in the church choir and she would often sing or hum her favorite hymns as she went about her day. She also had a love for flowers and not only enjoyed gardening, but also visiting local gardens and arboretums when on vacation with her family.

Earnestine was preceded in her death by her parents and by several siblings. Eugene Ward, Johnny Ray Ward, Jimmy Ward, Verble Lee Manning, Robertine Daniel and Eula Mae Cook, as well as, by two daughters, Earleen Daniel-Dunlap and Joyce Daniel. She is survived by her sister, Maxine Darby of Tucson AZ, by two children, Gloria J. Reed of Parkville Maryland and Frederick R. Woodford of San Francisco CA. She also leaves behind eight grandchildren, several great grandchildren and an abundance of nieces and nephews.

Services for Earnestine will be held at Hays C.M.E. Church on May 6th 2021 with her viewing scheduled for 11am, followed by her home going service at 12pm.

To send flowers to the family or plant a tree in memory of Earnestine Woodford, please visit Tribute Store
Thursday
6
May

Share Your Memory of
Earnestine
Upload Your Memory View All Memories
Be the first to upload a memory!
Share A Memory
Send Flowers
Plant a Tree