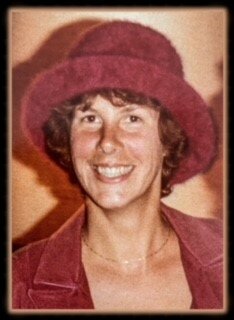 Pam was born February 7, 1949 in Detroit, Michigan to the late Craig and Patricia (Hall) Bowen. She was preceded in death by her beloved brother, Blake (Rick) Bowen, her precious son, Leonard Taormina, and her benefactor and friend, Lyle Hartka. Surviving Pam are loving cousins in Colorado and Michigan, and friends in California and Pinehurst.

Pam came of age in the 1960’s, and when her family relocated to California, her gypsy spirit was awakened and she fully embraced the counter-culture of the era. She was both a patron and a creator of artistic expression. Whether on a theatrical stage, singing into a mic with guitar in hand, or at her studio space surrounded by art supplies, Pam was in her element. She also held a deep affection for all things feline, particularly her fur babies: Ping and Blackie.

After years of self-discovery, Pam was ultimately inspired to become a substance abuse counselor, practicing in Carmel and Salinas. She impacted countless lives, and her sober lifestyle became an inspiration to many. Pam lived happily in California until her Multiple Sclerosis—the same disease that took her brother—became advanced and necessitated her move to Pinehurst, NC to live with her parents. When her parents’ health concerns prompted their move to Colorado to live near family, Pam became a resident of The Greens at Pinehurst. Despite her many challenges, Pam remained positive and joyful.

Pam Bowen lives on in the hearts and memories of her family and friends. A private ceremony will return Pam to her beloved California, where she will rest with her mother and father. Donations in Pam’s memory may be made to The National Multiple Sclerosis Society.

To send flowers to the family or plant a tree in memory of Pamela Bowen, please visit Tribute Store

Share Your Memory of
Pamela
Upload Your Memory View All Memories
Be the first to upload a memory!
Share A Memory
Send Flowers
Plant a Tree