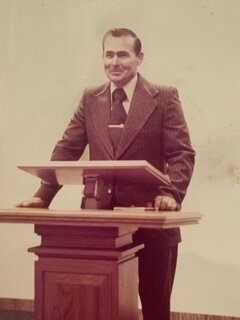 Johnny Earl Edwards was born in Lena, Oklahoma on December 12, 1942. He passed away November 3, 2022, at the age of 79. John was one of 12 children of Earlen and Flora Smith Edwards. While growing up he worked on the farm picking cotton, corn, watermelon, and whatever needed to be harvested. As a young man he joined the military and while deployed in Panama he met the love of his life, Marta. They were married on August 16, 1965 and were married for 57 years. When John left the military, he remained in the Monterey area where he began to learn about Bible truths. He dedicated his life to serve Jehovah and was baptized on December 11, 1968. He was a faithful servant of Jehovah for 54 years. During that time, he served in several congregations and eventually became part of the Marina Congregation. He loved to be out in the ministry teaching others Bible truths. He worked as a gardener and a maintenance man for many years.

The Edwards Family would like to thank all who have provided the family with words of comfort & support during these difficult times, all the scrumptious meals and for your warm hospitality. May Jehovah’s blessings be with you all.

To send flowers to the family or plant a tree in memory of Johnny Edwards, please visit Tribute Store
Monday
5
December

Share Your Memory of
Johnny
Upload Your Memory View All Memories
Be the first to upload a memory!
Share A Memory
Send Flowers
Plant a Tree