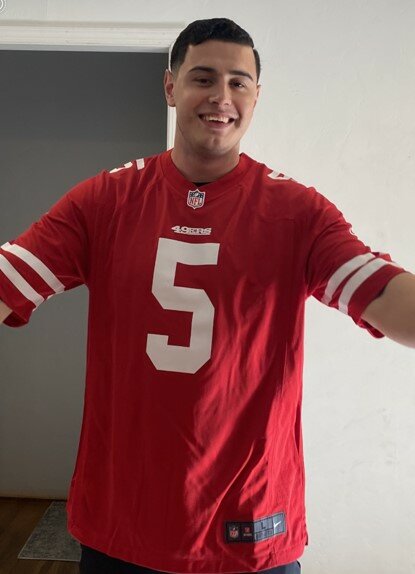 Nolan was a friend to everyone. He was best known for his genuine easy-going personality and for his infectious eternal smile that will never fade away.

As a toddler he was known for never separating from his Chupie which earned him his lifelong nickname Nupie. As an adult he was attached to wearing his Ray Ban sunglasses.

Nolan held many passions from sports to going to the gym. He was a die-hard 49ers fan. He was so happy when he received his #5 Trey Lance jersey for Christmas. Baseball was one of the other passions as he played at the age of 4 then developed into watching his favorite team the San Francisco Giants. He was able to witness some of Barry Bonds homeruns over the seasons. He had a competitive spirit towards all his passion whether that would be playing backyard basketball, going to the gym and lifting weights to playing video games.

His dedication and drive to help others made a lasting impact in the lives of everyone he touched. His beautiful life impressed us all and will be forever cherished. He left behind devoted friends, beloved pets and many loving family members. He could never be forgotten and will always be kept safe in our hearts.

To send flowers to the family or plant a tree in memory of John Perry, please visit Tribute Store
Wednesday
4
May