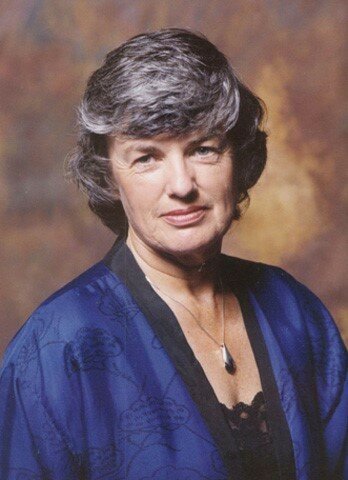 Lou Mathews, born as Mary Louise Young, died suddenly on March 17th, 2022 in the company of her loving family. Lou was born in Hollister, CA in 1931 to Jack and Cedora Young. She met and married the love of her life, Donald Mathews in 1953 and followed him across the United States throughout his career as a Naval aviator, while raising three daughters, Robin, Carol, and Jennifer. Having given birth to her 3rd daughter on the Peninsula in the late 1950s, they returned from Annapolis, MD, to Monterey in 1970 to build several homes in Skyline Forest. In 2013 it was time to downsize and join Forest Hill, a senior living community, in a cottage where they quickly became active members.

She compiled three cookbooks, the “Lou’s Kitchen” trilogy, that are treasured heirlooms, as much for the wit and humor that shine through Lou’s commentaries, as for the delicious recipes themselves. As she says in the notes to a quick Hot and Sour Soup recipe, “I would add salt to taste, but maybe you wouldn’t. Who knows what evil lurks in the hearts of men?”

A gifted musician, Lou gave her first concerts as a child and performed throughout her life, until her final concert in 2019 where her vocalist granddaughter Bethany joined her for a St Patrick’s day concert at Forest Hill.  She began lessons on the piano at the age of 4, played various instruments in the marching band during high school, and studied organ in Annapolis under John Cooper from the Peabody Institute. Having earned her graduate degree in Music from San Jose State, she spent her life mastering her two musical passions: organ and harp. A member of the American Guild of Organists, she taught music at Hartnell College and Monterey Peninsula College. She was also organist at NPS Chapel, Community Church of the Monterey Peninsula, and various other churches for over fifty years.

Along with her love of music, Lou’s hobbies included reading mystery novels, cooking, and birdwatching. Lou was a member of the Pacific Grove Adult School birding group for over 18 years and loved traveling on birding trips throughout the world with her sister, Lynda Hughes, including visits to Majorca, Corsica, Venezuela, and Costa Rica. After Donald retired in 1974 as a Navy Captain, they also traveled the world together—over a dozen countries, from Norway to Spain, and Australia to Japan. They spent many vacations camping with the family all over California. The many mysterious trinkets and exotic souvenirs that she brought back from these trips were much played with and long admired by her seven grandchildren.

While Lou will be profoundly missed by friends and family, we are sure that the harps of Heaven will sound that much sweeter for her joining in the chorus.

A Celebration of Life will be held on May 29 at 3pm at Community Church of the Monterey Peninsula, 4590 Carmel Valley Road, Carmel-By-The-Sea, CA 93923.

In lieu of flowers, donations may be made in Lou's name to:

The American Guild of Organists

To send flowers to the family or plant a tree in memory of Lou Mathews, please visit Tribute Store