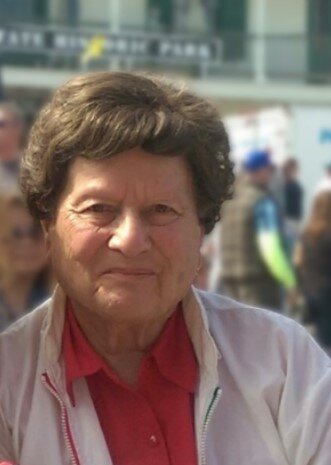 Marie JoAnne DiMaggio passed away the morning of March 24, 2022 In Monterey California.She passed peacefully on her own terms. Marie was born August 12, 1928 in Oakpark, Illinois. In 1949, after her graduation from HighSchool, she moved with her family to Watsonville California where she was employed with a pharmacy for several years. While living in Watsonville she would go out with her girl friends dancing and frequent the Blue Ox where she met the love of her life Bartolo DiMaggio. After a brief relationship Bart and Marie were married in October 1957. They were married for 59 years. At that time they moved to Monterey where they were lifelong residents on the Peninsula. After a few years they started their family, where they raised two sons Steven Anthony DiMaggio and Michael Paul Dimaggio. Marie was a stay at home mom where she was a dedicated wife and mother. Some years later she was the bookkeeper for the family Business ”DiMaggio Roofing” which she continued doing until their retirement. Mom's one true love as a young girl was ice skating. Once she moved to Monterey she made numerous friendships with other couples on the Peninsula. Together they enjoyed many years of camping with friends down in Big Sur, as well as Clear Lake and Konocti. Through the years Marie's true passion was with the Catholic Church. As a couple they were very involved with San Carlos Church volunteering with the ICF as well as the Santa Rosalia festival. Marie is predeceased by her parents Salvatore and Catherine Giuffre as well as her brothers Salvatore and Charles Giuffre. Marie is also survived by her sons Steve DiMaggio, Mike (Valerie) DiMaggio, her five grandchildren, Gia DiMaggio, Sara (Jake) Christie, Michael (Kayla) DiMaggio, Rachel DiMaggio, Christopher DiMaggio, and two step grandchildren Kristina and Tommy Ludovico in addition to one great grandchild John Christie, as well as numerous nieces and nephews.We want to thank and acknowledge Melinda Estaban for taking care of our mom who has been more than just a caretaker and friend but has turned into being our family member. Melinda knew our mom better than anybody and without Melinda,mom's life would have been totally different. We would love any donations to be made to the ICF of Monterey in Honor of Marie DiMaggio

To send flowers to the family or plant a tree in memory of Marie DiMaggio, please visit Tribute Store
Wednesday
6
April

Share Your Memory of
Marie
Upload Your Memory View All Memories
Be the first to upload a memory!
Share A Memory
Send Flowers
Plant a Tree