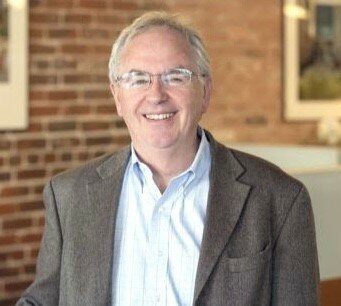 Mike was born in Lebanon, Oregon to Robert and Helen Bellinger as the 2nd child of 9 children. Mike was raised in a hard working family on a farmhouse in the country. He excelled at 4-H specializing in woodworking. As a young man, he built desks, chairs, tables, and grand- father clocks. Before college, he wanted to start a business building furniture, however, he decided to leave and study Landscape Architecture at Oregon State University, and later completed his Master’s Degree at the University of Illinois, Urbana-Champaign. He worked his first design job in Portland where he met Aislinn Johnson, who managed several printing shops in downtown. They married in 1984, moved to San Francisco for a couple years, and then to Monterey in 1987 to raise a family.

Mike started a business partnership with then co-worker, Larry Foster on January 1, 1994, which later became BFS Landscape Architects. Their company grew over several years to have a second office in Gilroy, which moved to Palo Alto, and eventually Mountain View. Mike’s professional work on the peninsula began with his involvement on the design and construction of the Monterey Coastal Recreation Trail and has since been involved with the development and design of many local schools, university campuses, regional parks, California State Parks, and youth spaces of the Monterey Bay, Salinas Valley, and Bay Area. Mike believed in the power of thoughtful design for bringing communities together. He loved his work, all his co-workers, and the projects he worked on.

Aside from the office, when he was not working, he kept himself busy remodeling his house in Monterey. He was very involved with the San Carlos Cathedral Parish, Knights of Columbus, San Carlos School, Palma High School, and Cal Poly Landscape Architecture Design program as a professional advisor.

Mike and Aislinn are survived by their two sons, Josh and Rob. Dad was a very big family man. He enjoyed driving up to Oregon several times a year for family events. He enjoyed hiking, camping, woodworking, gardening, making homemade ice cream, and various other things. He loved the San Francisco Giants. The office has had season tickets since 2001 for Giants Baseball and he went to spring training games in Arizona since then as well. Watching baseball with his wife, sons, family, co-workers, clients and friends was special for him.

Mike is survived by his mother Helen; brothers Jim, Pat and Dave; sisters Chris, Mary, Linda, Molly, and Amy. He was a very modest man. He put his faith, family, and friends ahead of himself. His last wish was to travel the country in an old camper van. He now rests with his wife Aislinn, who passed before him in 2013.

A Rosary will be recited on Wednesday, March 30 at 6:00 pm and Funeral Mass will be Celebrated on Thursday, March 31 at 10:00 AM, both at San Carlos Cathedral in Monterey.

Memorial contributions are suggested to CASA of Monterey County or Cancer Patients Alliance.

To send flowers to the family or plant a tree in memory of Michael Bellinger, please visit Tribute Store
Wednesday
30
March