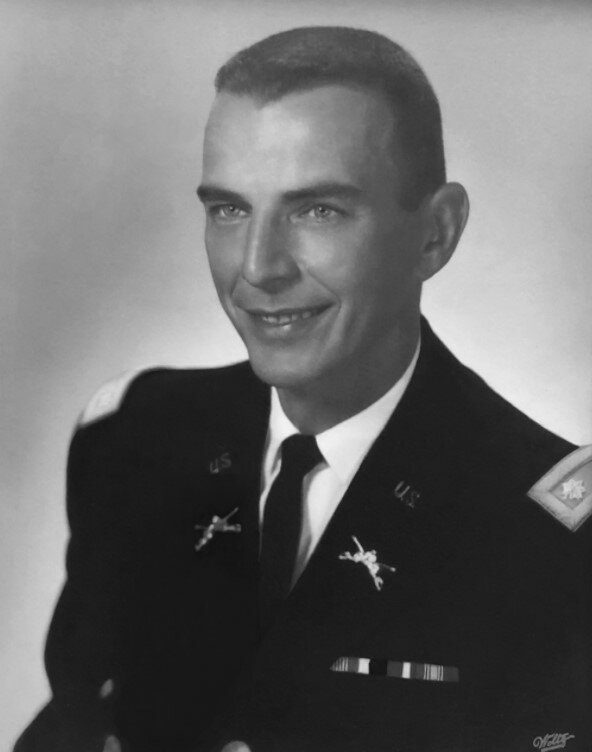 The only child of Francis, Sr. and Esther Marie (Hennessey) Wilmot, Pete was born in Rome, New York and grew up in nearby Elmira.

He was an all-sports star, and a two-way lineman at the Manlius School, anchoring a team that completed an undefeated season without allowing a point. He went on to Pennsylvania Military College, continuing with football while also boxing and playing baseball. He declined an offer to try out for the short-lived New York Yanks of the NFL, choosing instead to pursue his dream of an Army career.

In his first assignment, with the 14th Armored Cavalry in West Germany, he met and married Beverly Tucker of Camas, Washington, a civilian recreation director for the Army. With their growing family, they enjoyed travelling around Europe. They recently celebrated their 68th wedding anniversary.

Returning to the United States, he attended the Army Command and General Staff College in Fort Leavenworth, Kansas. From there, he transitioned from Armor to Intelligence. He was assigned to the Pentagon, planning overhead reconnaissance missions and becoming the Army’s expert on the SR-71 Blackbird.

After a battalion command at Fort Knox, Kentucky, he was assigned to the top-secret Studies and Observations Group (SOG) in Vietnam. In preparation, he completed Green Beret training at the age of 41. It was on the Cambodian border on January 22, 1970 (Beverly’s birthday) that he was sure, in his words, that he’d “bought the farm.” He and other SOG troops repelled a fierce Khmer Rouge incursion into their operating base. Nonetheless, he often spoke of his time with SOG as, “the most fun I had in the Army.” His service resulted in the Legion of Merit, Meritorious Service Medal (with oak leaf cluster), and the Bronze Star.

A calmer tour at Fort Ord, California, followed. It was on there that he was able to indulge in his greatest sports love, golf. He was a regular at the Bayonet course, often competing for the club championship. For many years, he was a Marshall at the Bing Crosby (AT&T) Pro-Am tournament.

Another tour in southeast Asia came at the end of the war. From Nakhon Phnom, Thailand, he planned more reconnaissance flights over Cambodia and Laos. He witnessed the last day of Phnom Penh before it fell, and in the last days of Saigon, he assisted with negotiations for the safe withdrawal of American personnel. He left Saigon by helicopter on the airport’s final day of operation.

Returning to Fort Ord, he ran the Officers Club and the Golf Course. Near retirement, he and Beverly moved into their current home in Marina. Leaving the Army in 1979, Pete spent ten years with Monterey Savings and Loan, followed by a decade with the Northern California Golf Association.

The family will gather for a graveside service. A memorial service with friends is being planned for a later date. The family wishes to thank the staff of Hospice of the Central Coast for their help in recent weeks. In lieu of flowers, donations can be made to First Tee of Monterey County (firstteemontereycounty.org).

To send flowers to the family or plant a tree in memory of Francis Wilmot Jr., please visit Tribute Store

Share Your Memory of
Francis
Upload Your Memory View All Memories
Be the first to upload a memory!
Share A Memory
Send Flowers
Plant a Tree