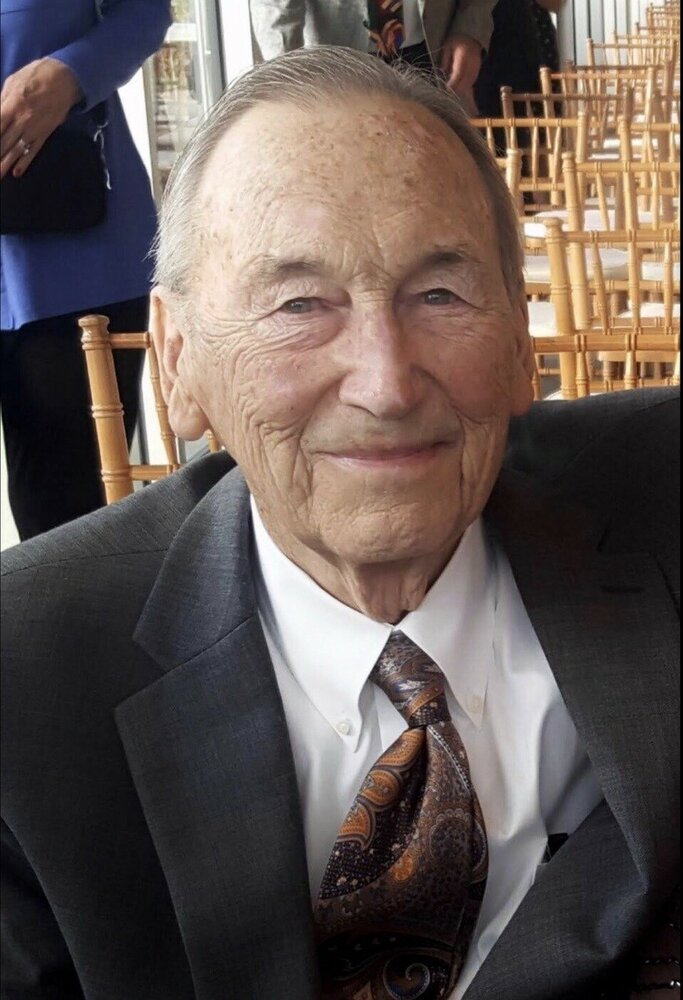 Paul William Staley, loving husband and father of 7 children passed away on the morning of November 29,2021, at the age of 97 in his home in Monterey, CA. Surrounded by his children, he passed peacefully and pain free.

John Staley and Doris (Collier) Staley welcomed Paul, the first of five children on July 5, 1924 in Sedalia Missouri. His childhood was spent in Kansas City, Blackwater, MO and mostly in the town of Nelson, MO.  Living in these small towns brought much entertainment to his children, nieces and nephews.  His brothers and sisters would gather and tell story after story of sweet, funny and mischievous adventures they shared in small town living.

After graduating from Nelson High School in three years, he attended Central Missouri Teachers College in Warrensburg, MO.  Coming out of the Depression and having a lack of funds, he wanted to join the Army Air Force but he couldn’t without his parents signature so he went to work in Kansas City.  Soon the draft age was lowered to 19 and his parents feared him being thrown in with no control, so they signed the papers for him to join the Army Air Force to train as a Pilot.

After training and earning his wings, he boarded the Queen Mary in New York and sailed to his airbase in Podington England.

At the end of the war and after flying 24 missions, he headed home to Marry his childhood love, Kathryn Sue Eichman. They moved to Sunflower, Kansas and stayed there while Paul earned a B.S. in Mechanical Engineering.

In the fall of 1983 Paul and Kit Sue said goodbye to California and made their home in Detroit again to prepare for another adventure, Building and Opening a Ford Assembly Plant in Hermosillo, Mexico. Moving to Mexico in 1985 and Managing the start up of the Hermosillo Ford Assembly Plant was the most exciting experience he ever had.  After turning the plant operations over to the Mexican management Team, He and Kit Sue retired to Monterey, CA in 1988. They traveled extensively through Europe, Australia and Japan and made a road trip yearly across the united states and back to visit with every family member and friend they had ever had.

Paul enjoyed Golf, boating, and talked about playing bridge weekly at the Park Lane Independent Living facility he and Kit Sue moved to in 2013.  He was always up for a good party and had a Love for good music.  He considered himself a Bar Room Tenor, and was known for his beautiful voice and was always breaking out in song. He was also quite the whistler!

Paul's loyalty, Love for family and his generosity to all including the homeless was admired by all. To all of the staff and friends he left at the Park Lane, he was known as a kind and gentle spirit.

While Living at the Park Lane he was loved and cared for by a wonderful and caring staff that was almost like family. We, his children, cannot show enough gratitude to them for this. He will be missed by all.

In Lieu of flowers, Donations can be made to his favorite charity, The Salvation Army of Monterey, 1491 Contra Street, Seaside, CA 93955

To send flowers to the family or plant a tree in memory of Paul Staley, please visit Tribute Store
Friday
10
December

Share Your Memory of
Paul
Upload Your Memory View All Memories
Be the first to upload a memory!
Share A Memory
Send Flowers
Plant a Tree