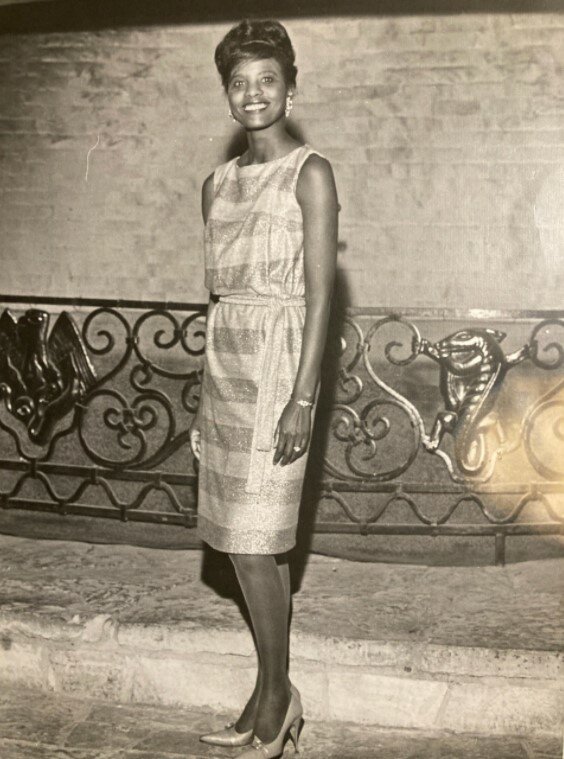 Ada was born on January 24, 1929, in Camden, Arkansas to Idell Leake and JD Patterson. Ada attended a one-room, primary school and gradate from the junior high school class of the Camden Colored High School before being sent to live with her maternal Aunt Mamie Armstrong in Houston, Texas, which enabled Ada to attend and graduate from Jack Yates High School. Ada was Valedictorian of her graduating class.

Ada married Andrew B. Johnson immediately following high school graduation and began life as an enlisted wife as a member of the U.S. Army. Raising a family in the military led to being stationed in Texas, Washington, and finally Fort Ord, California. Ada has lived in the Monterey Peninsula for 65 years, such as Ord Village/Fort Ord, Pacific Grove and Seaside.

Ada began her Civil Service career working in the Laundry in Fort Ord, CA, which was one of the few jobs available to African American women in the Monterey Peninsula in the mid 1950’s. Ada made most of this opportunity and worker her way up through the Civil Service system. She was the 1st African American woman hired as a Key Punch Operator in Fort Ord, CA. She received her training through IBM in San Jose, CA and was able to move up to become Supervisor of Key Punch Operators, Computer Technician, Computer Librarian, and Finance Analyst. Ada retired after 30 years, having reached the level of GS-12. She had earned her BA degree from the University of San Francisco of California.

Ada became a member of St. Francis Xavier Catholic Church in Seaside, CA, where she volunteered at the church’s food pantry for many years. Ada enjoyed gardening with her long-time companion, Clarence Campbell, socializing with her many friends at the Elks Club, especially with her best friend Billie Faye Edwards. Ada loved to travel, too! She was able to travel to many cities and countries, like Germany, Austria, and Paris, France with her daughter, son-in-law, and granddaughter.

Ada was preceded in death by her mother, Idell Leake-Mills; her late husbands, Andrew B. Johnson, Luscious Hooks, and her long-term, loving companion Clarence Campbell; and her best friend Billie Edwards.

Ada is survived by a daughter, Denise E. Kesten and son-in-law Detlev Kesten of Marina, CA; a son, Martin A. Johnson and daughter-in-law Marja Johnson or Portland, Oregon; her grandchildren, Donique Goumenidis of Tracy, CA, Meika Darville of North Carolina, and Megan Johnson of Camas, Washington; and 9 great-grandchildren.

A special thanks to her extremely caring, helpful friend and neighbor, Ingeborg Murphy; to her compassionate caregivers at Sunrise Senior Residence; and to the amazing folks at Hospice of the Central Coast.

Viewing is to be held from 10AM to 1PM on Wednesday, December 1, 2021 at the chapel of Mission Mortuary & Memorial Park in Seaside, CA.

Graveside prayers with Father Mike Volk and burial at 1PM on Wednesday, December 1, 2021 at Mission Mortuary and Memorial Park in Seaside, CA.

To send flowers to the family or plant a tree in memory of Ada Hooks, please visit Tribute Store
Wednesday
1
December

Share Your Memory of
Ada
Upload Your Memory View All Memories
Be the first to upload a memory!
Share A Memory
Send Flowers
Plant a Tree