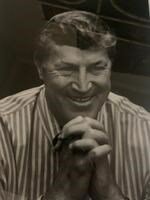 On a warm September morning just days after celebrating what would have been his 63rd wedding anniversary, Dr. William S. McAfee took his last breath and re-joined the love of his life, Patty.

William Shannon McAfee, Bill to his friends, Poppie to his family, and a true gentleman to all he met, was raised in Portsmouth, Ohio. A self-proclaimed "little Country boy," Bill was born to Clarence Shannon and Myrtle Watrous McAfee on January 30, 1934.
Bill received his bachelor's degree from Ohio Wesleyan University and graduated from The Ohio State University College of Medicine in 1961. Though originally interested in orthopedics, Bill traveled to the University of California, San Francisco Medical Center for a surgical internship and found his passion in 1962 when he pursued a residency in otolaryngology.

Bill married Patty on September 6, 1958 in his hometown church in Portsmouth. From there, Bill's career took them first to San Francisco then to Charleston, South Carolina where he served at a Naval Hospital. In Charleston, a trusted mentor told him about the Monterey Peninsula. Once on the Peninsula, Bill became an integral part of the medical community, practicing for 36 years. During that time, he co-founded Central Coast Head and Neck Surgeons and the Monterey Peninsula Surgery Center. In 1995, he established the Rotacare Clinic in Seaside to provide free medical care for uninsured patients. In 2003, Bill was named Physician of the Year of Monterey County, and in 2010 he received the Jefferson award for his service to his community.

Throughout their marriage, Bill and Patty loved to travel, often planning cruises to new and different destinations. Their favorite spots, though, were Hawaii and Sedona, Arizona, to which they were frequent travelers.
Bill's earnest voluntary spirit found him serving in the Rotary Club of Monterey, as a bell-ringer for the Salvation Army, and in many other volunteer pursuits.

The family would like the say a special thank you to Jone Togamalo who spent the last two years caring for Bill and to Hospice of the Central Coast.

The family will be holding a private burial ceremony. A celebration of Bill's life will be held at a later date to allow family and friends to attend from afar. Those wishing to make a memorial gift in his name are invited to consider the Salvation Army or a charitable contribution of their choice in lieu of sending flowers.

To send flowers to the family or plant a tree in memory of Dr. William McAfee, please visit Tribute Store

A Memorial Tree was planted for Dr. William
We are deeply sorry for your loss ~ the staff at Mission Mortuary
Join in honoring their life - plant a memorial tree

Share Your Memory of
Dr. William
Upload Your Memory View All Memories
Be the first to upload a memory!
Share A Memory
Send Flowers
Plant a Tree