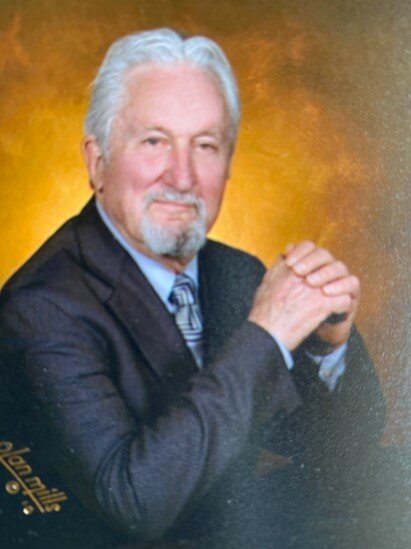 The beloved patriarch of the Miller family, passed away August 9, 2021. Born to Leo and Grace Miller and raised in Minneapolis Minnesota.Perry attended Augsburg College, where his education was interrupted for his tour of duty in the Korean War. He returned to graduate in 1951, and then headed to California to join his family who had since come to Monterey to open Miller Mayflower Moving and Storage and Millers Carpets and Clean Care.Perry worked alongside his father Leo and brother James, and brother-in-law Eugene Betz in the family business. As business grew, Perry also took interest in Real Estate investing. Perry met and married Barbara Reed, his wife of 62 years in Carmel where they married in 1954 and raised their family. He was active in both professional and social organizations. In early family life, it was Kiwanis Club and Jaycees. He was also a long-timemember of the Pacheco Club and Rotary Club. A 50+year member of the Beach and Tennis Club in Pebble Beach, he was a lifelong tennis player, playing well into his 80’s. He loved classic cars, and acquired an impressive collection of cars along the way and he enjoyed driving dignitaries and grandchildren in parades in Carmel and Monterey. His later in life passion became Bridge, playing all over the peninsula and competing in tournaments. He became a diamond Life Master. A devoted and passionate Christian, he lived his life centered around his faith. He was preceded in death by his wife Barbara, his sister Catherine, and his brother James. He is survived by his three children, Melynda Olson, Lesley Anderson, and Reed Miller; 4 grandchildren, and 7 great grandchildren. A celebration of his life will be held at Carmel Presbyterian Church on Friday September 17th at 1:00pm

To send flowers to the family or plant a tree in memory of Perry Miller, please visit Tribute Store
Friday
17
September

Share Your Memory of
Perry
Upload Your Memory View All Memories
Be the first to upload a memory!
Share A Memory
Send Flowers
Plant a Tree