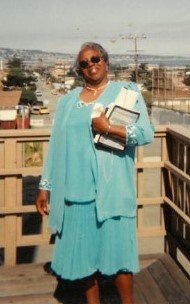 Lucille Jackson was born Lucille Hill on September 18, 1933 in Mt. Pleasant, Texas to the parents of Dillard Hill and Jeanie Watson.

Lucille relocated to California where she met and married her first husband, Clarence Briscoe. From this union she had 2 sons, Willie Clyde Briscoe and Larry Edward (Briscoe) Jackson. Lucille remarried in August 1961 to Misa Jackson the love of her life and from this union a third son, Misa Jackson Jr. was born.

In her early years, Lucille was employed by the school district of Seaside, CA which she loved. Momma Lucille also enjoyed playing cards and fishing in her spare time for fun and relaxation. Later, she made a life changing decision to give up working to become a stay at home mom to dedicate and focus her time taking care of her sons whom she loved unconditionally.

Lucille loved the lord and accepted Christ her Lord and savior at an early age. After moving to Seaside, CA, Momma Lucille joined the church of Emmanuel Church of God in Christ where she was a devoured and faithful Christian and mother of the church for over 50 plus years before relocating to Sacramento, CA in 2015 to be close to her family.

Momma Lucille with her bright smile was loved tremendously. She will be in our hearts and greatly missed by everyone she touched from family, friends, church family and a host of others. Until we meet again, “Rest in Heavenly Peace.” We love you always!

To send flowers to the family or plant a tree in memory of Lucille Jackson, please visit Tribute Store
Friday
30
April

Share Your Memory of
Lucille
Upload Your Memory View All Memories
Be the first to upload a memory!
Share A Memory
Send Flowers
Plant a Tree