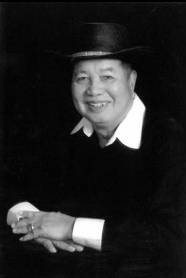 Fred was born on December 7, 1934 in Corregidor Philippines, to Venancio and Maria Nebreda. Early in his childhood the family settled in Naic, Cavite, Philippines where he grew up.

Fred met the love of his life in San Francisco through a chance introduction when his wife Julie immigrated in 1958; they were married on February 27, 1960. After being stationed in Texas, Washington and Germany, in 1966 stationed in Fort Ord, they settled in the Monterey Peninsula, making Marina home. They were active members of St. Jude’s Parish, the Filipino American Community Club, the Lions Club, American Legion, and the Knights of Columbus.

Fred joined the US Army in 1955 being awarded several decorations for his service in Korea, Cuba and 2 Tours in Vietnam. He is a recipient of a Bronze Star Medal, Vietnam Service Medal, Gallantry Crossing (twice) and a host of others. He retired from Fort Ord 7th Infantry after 22 years of service in September of 1977. Two months later, formally educated in Criminal Justice, he joined the Monterey County Sheriff’s Department as a Deputy Sheriff, where he served another 22 years. He is a long-standing member of both the International Police Association (IPA) and the Monterey County Peace Officers Association (MCPOA).

In 2008, while Fred & Julie were on tour with the IPA in Russia, Fred won a drawing to mount the steps of Naryshkin Bastion of the Fortress and Fire the noon time Cannon in St. Petersburg, a tradition started by Czar Peter the Great; ordinarily saved for high officials and dignitaries. Fred treasured this experience, and it was featured in the Monterey Herald. Fred living a life of public service will receive double honors at burial from both the US Armed Forces and the Monterey County Sheriff’s Department.

Fred is pre-deceased by two brothers (Rudy and Tony) and survived by his sister; Helen. He is survived by his wife Julie of nearly 61 years of marriage and his two daughters, Debra Nebreda and Brenda (son in law Bernard Vailuu). His 3 grandchildren, Justin Vailuu, Catherine (grandson in law Jeremy Sappingfield) and Jazmine Vailuu. As well as 6 great-grandchildren; Lillian, Adrian, Logan, Vivian & Marian (twins), Junior. Beloved nieces and nephews, sisters in law Raquel and Medy Nebreda and cherished extended family and lifelong friends. His services are as follows:Visitation & Rosary Vigil

Funeral Mass (Outside Chapel- All are Welcome)

To send flowers to the family or plant a tree in memory of Walfredo Nebreda, please visit Tribute Store

Share Your Memory of
Walfredo
Upload Your Memory View All Memories
Be the first to upload a memory!
Share A Memory
Send Flowers
Plant a Tree