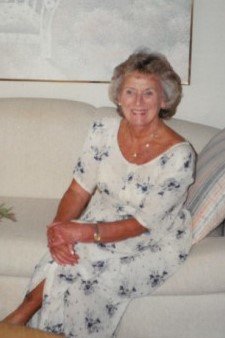 Jane was born on September 1, 1930, in Los Angeles, California. In 1950, she married John Martin Herbst, who was killed while performing in an airshow as a VF-84 Jolly Rogers Fighter Pilot-flying the F8- C Crusader. As a result, Jane tragically became a widow in 1960 and had to face the reality of raising four children by herself.

In 1961 she made the decision to move her little family from Virginia Beach, VA, to Monterey, California. She chose Monterey because while John was attending the Naval Postgraduate School (NPS), they decided Monterey is where she and John had planned to retire when the time came. Once getting her family settled in Monterey, Jane stayed very active in Navy activities. In 1970 she had the distinguished honor of becoming the first woman President of the Navy League serving at the Naval Post Graduate School in Monterey while singlehandedly raising four children, and never wavered in her love and commitment to them and instilled in them the love of family.

Once all her children were raised and "out of the nest," Jane married Dempsey Butler, Jr., a Navy Fighter Pilot (VF-111). They enjoyed 25 years together. After Dempsey died in 2009, she moved to Park Lane Senior Living facility. She enjoyed her life there and was so grateful to the Caregiving staff that took such good care of her.

Due to COVID restrictions, there will be a small, private family service. In lieu of flowers, donations may be made in Jane Herbst Butler’s memory to Central Coast VNA Hospice, 5 Lower Ragsdale Drive, Monterey, Ca 93940

To send flowers to the family or plant a tree in memory of Jane Butler, please visit Tribute Store

Share Your Memory of
Jane
Upload Your Memory View All Memories
Be the first to upload a memory!
Share A Memory
Send Flowers
Plant a Tree