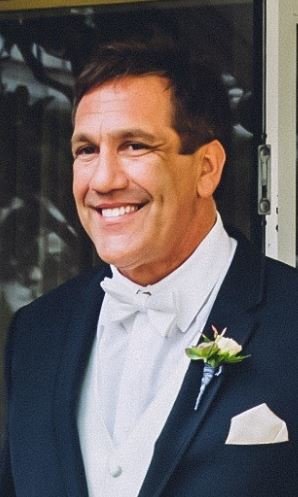 Alex Jason “A.J.” Sanchez died in San Francisco on July 24, 2020.  Born in Monterey, California on August 22, 1966 to the late Alex Hernandez Sanchez and the late Kathryn Bernadette (Russo) Sanchez, he was the youngest of four children.  His parents met in Monterey while attending Monterey High School together.

AJ graduated in Monterey High School’s class of 1984.  He made friends with many of his classmates over the years starting at Bay View School in New Monterey, many of which he was still close with at the time of his death.  As a teenager he played baseball for his high school and while attending Monterey Peninsula College.  He worked at his family’s grocery store, Bruno’s Market & Deli in Carmel-by-the-Sea.  His parents’ entrepreneurial spirit lived on in AJ.  He had unlimited creativity and took great pride in his role at their store.

AJ was an avid cyclist and traveler.  He traveled across Italy and France via bicycle from the Adriatic Sea to the Tyrrhenian Sea in Italy and followed various stages of the Tour de France.  He raised money for charity through cycling with the Arthritis Foundation.

He loved to work with his hands remodeling houses. Eventually, he used those skills along with his passion for food and wine to build two businesses that were inspired by his parents’ grocery market in his ventures into a pizzeria and later a wine bar.

Both businesses, Carmel Pizza Company and Altalena Vinoteca, are located in San Francisco.

He will be remembered for his infectious smile, his larger than life personality, his generous disposition, his heart of gold and his loving spirit.  He was a kind soul with a good heart and a friend to many.  AJ touched many people, even those be only met briefly, with his drive and his generosity.  He brought joy to the community through his smile and his love for making everyone truly guests at his business.  He connected with people from across the world.  Everyone who knew him will truly miss him.

He is survived by his wife, Amanda Orloff; his sisters Carol Sanchez and Naida “Puffy” (Sanchez) Mercurio, his brother Fermin Sanchez; nieces and nephews Ryan Sanchez, Alicia Sanchez, Christie Sanchez, Katherine Mercurio and Dominic Mercurio.  AJ is preceded in death by his parents and the three of them will be reunited when AJ’s urn is placed into their mausoleum at San Carlos Cemetery.

May his memory be eternal.

To send flowers to the family or plant a tree in memory of Alex Sanchez, please visit Tribute Store

Share Your Memory of
Alex
Upload Your Memory View All Memories
Be the first to upload a memory!
Share A Memory
Send Flowers
Plant a Tree