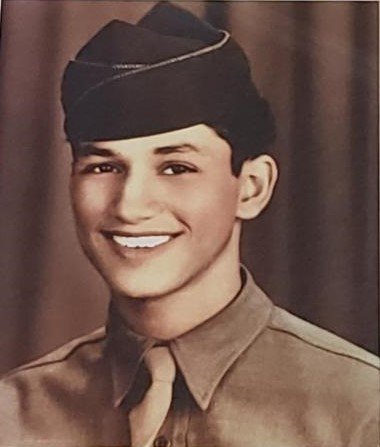 Alex L. Quinones, a long-time resident of Marina, passed away on February 16th 2020 at the age of 91 after a long battle with Alzheimer's. He passed away peacefully surrounded by his family.

Alex Leo Quinones - also known as "Big Al" - was born on January 18th 1929 in Brooklyn, New York to Mary and Leo Quinones. He spent his youth in the Bronx growing alongside his older brother, Jim, and his younger sister, Zennie. At the age of 17, Alex traveled to Manhattan, where he enlisted in the U.S. Army.

After completing basic training, Alex was sent to San Antonio, Texas. It was there that he saw the love of his life, Hortensia Flores, walking down the street. They married on April 24th 1949, and remained so until his death. In 1950, the two welcomed their first daughter, Mary. The family would continue to grow as they moved from Texas to places such as San Francisco and Japan, welcoming son Jesse in 1951, son Robert in 1957, and daughter Donna in 1963.

After completing his tour of duty in Japan, the Quinones family moved to Fort Ord, California. They eventually moved to the next town over, Marina. Shortly after, Alex was sent to Vietnam, where he was awarded a Purple Heart. He also rose to the rank of Staff Sergeant, before retiring from  the military in 1970. He would then spend the next 25 years working in the cardiology department at Silas B. Hayes hospital in Fort Ord. In his free time, Alex enjoyed bowling and watching western films, with his hero being John Wayne.

He is survived by his wife, Hortensia Quinones of Marina, CA, and their four children: Mary Malouf, Jesse Quinones, Robert Quinones (Marlo), and Donna Przekurat; eight grandchildren: Matthew, Kevin, and Daniel Malouf, Joseph, Joshua, and Nathaniel Quinones, Brian Quinones, and Megan Przekurat; three great-grandchildren: Milia Quinones, Cally and Elon Malouf; and his best friend until the very end, his dog, Roxxi. Alex is preceded in death by his parents and siblings.

Alex's family would like to say thank you to the staff at the VA and at VNA Hospice who took wonderful care of him in his final years, including: Elva, Stephan, Oma, and Trisha, among many more. We would also like to thank Dr. Shehab Saddy for caring for our father over these last few years.

In lieu of flowers, the family asks that you donate to the Alzheimer's Association, the American Parkinson Disease Foundation, to the Diabetic Association, or to the VNA Hospice of Monterey, CA.

To send flowers to the family or plant a tree in memory of Alex Quinones, please visit Tribute Store
Monday
24
February

Share Your Memory of
Alex
Upload Your Memory View All Memories
Be the first to upload a memory!
Share A Memory
Send Flowers
Plant a Tree