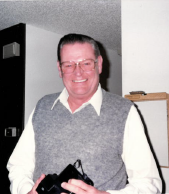 Raymond Thomas Dedden, 89 of Marina passed away quietly on December 16, 2019 at the Community Hospital of the Monterey Peninsula. Raymond will be remembered as a loving and devoted husband, father, grandfather, uncle and brother.

He was born on March 6, 1930 in Covington, Kentucky to Joseph E. and Anna Marie (Ablen) Dedden.  Determined to see the world, he entered military service by volunteering for the United States Army.  During his Army career, he served proudly in the occupation of Germany with the U.S. Constabulary Forces.  Raymond would eventually leave the Army and serve in the newly independent United States Air Force (USAF). It was through his travels with the USAF that he met the greatest joy of his life, his wife Fumiko, in Fukuoka, Japan. They were married on July 5, 1956 and were together until her passing in February 2015.

Raymond is a veteran of the Korean and Vietnam Wars, where he earned several medals and commendations, including the Army Good Conduct, Air Force Good Conduct, WWII Occupation and the Air Force Commendation medals. He began his USAF career as a flight engineer in C-119’s.  Later, in order to spend more time with his family, he transferred to Tactical Air Command (TAC) and specialized in weapons systems, avionics and radar.  After proudly serving his country and reaching the rank of Tech Sergeant, Raymond retired from the Air Force in 1970.  He and his family then settled in Marina, California where he began a new career as a Civil Servant aboard the local Fort Ord Army base. After another twenty years, Ray retired once again. The discipline and patriotism he learned in his military and civil service career never left him.  He was also a man that was very proud of his family and his community.  He volunteered for the City of Marina Beautification Project and served as a member of the Air Force Association.

Raymond led a rich and fulfilling life seeing much of the world. Ray and Fumiko loved to travel, especially to see their family in Kentucky, Japan, and southern California.

He is survived by his son, Phyllip (and wife Cheryl), his daughter, Darlene Kercheval (and husband Pat), grandchildren David Dedden (and wife Allison), Marc Dedden, and Samantha Giordano (and husband Timothy).  Ray was a deeply loved member of the local community and will be missed sorely by all who knew him, especially his family and friends.

A Rosary will be held at Mission Mortuary in Monterey on Monday January 6, 2020 at 6pm.  A Mass celebrating his life will be held the next day on January 7, 2020 at 11am at St. Jude’s Catholic Church in Marina. A graveside service at San Carlos Cemetery in Monterey will follow. After this service, please join the family for refreshments and reflection at the Mission Mortuary.

To send flowers to the family of Raymond Dedden, please visit Tribute Store

Share Your Memory of
Raymond
Upload Your Memory View All Memories
Be the first to upload a memory!
Share A Memory
Send Flowers