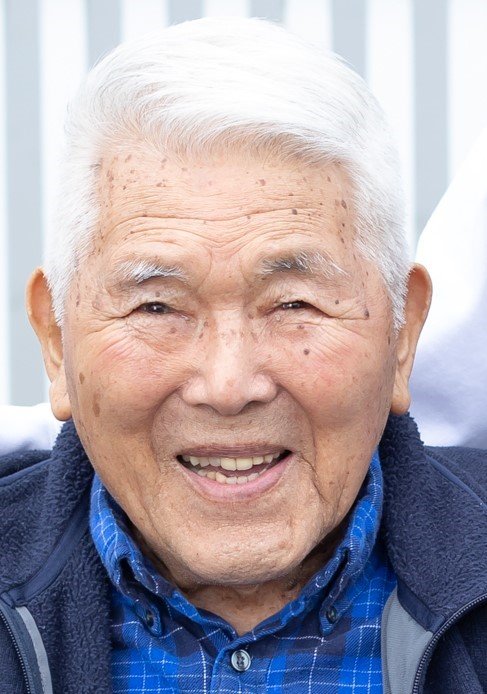 Royal Louis “Louie” Manaka, a lifelong resident of the Monterey Peninsula was born on January 25, 1920. He lived his life with grace and passion and passed away just as he lived, peacefully at home, surrounded by family on December 14, 2019.  He was one of nine children and is survived by his younger sister Lily Uyeda. Royal was born in Monterey, played football at Monterey High School, graduating in 1939. He then followed his father into the fishing business.  He was drafted into the Army in 1941 and served through 1945. Royal served as a First Sergeant in the 442nd Regimental Combat Team during WWII. He was awarded a Congressional Gold Medal and received France’s Chevalier of the Legion of Honor. Royal resumed fishing after the war. When the sardines disappeared from the west coast, he took ornamental horticulture design courses on the GI Bill and became a landscape gardener.  He was appointed to the Seaside Parks and Recreation Commission where he served for many years. He also served on various other city committees and was past president of both the Monterey Peninsula Landscape Association and the Monterey Peninsula Japanese American Citizens League. He was a member of the El Estero Presbyterian Church where he served as an Elder and youth group leader. Royal is survived by the love of his life, his wife of 73 years, Hiroko and children Karen (Eddie), Royal (Andi), Sue (Keith), Cindy (Zafar), Cassie (George), nine grandchildren Torrie (Matthew), Mark (Caitlin), Dylan, Luke, Alia, Riana (Raymond), Matthew, Jenna, David and five great grandchildren Oliver, Evangeline, Emma, Kade, and Jett .

We would like to thank Lenie for her many years of devoted care for our father and the many family friends and relatives for their love and support. We also want to thank the VNA Hospice personnel, the Visionary Healthcare Services personnel, and the Veterans Administration.

Family and Friends are invited to attend a Celebration of Life at the El Estero Presbyterian Church, 490 Camino El Estero, Monterey, California, on Saturday, January 25, 2020 at 11a.m.

To send flowers to the family or plant a tree in memory of Royal Manaka, please visit Tribute Store

Share Your Memory of
Royal
Upload Your Memory View All Memories
Be the first to upload a memory!
Share A Memory
Send Flowers