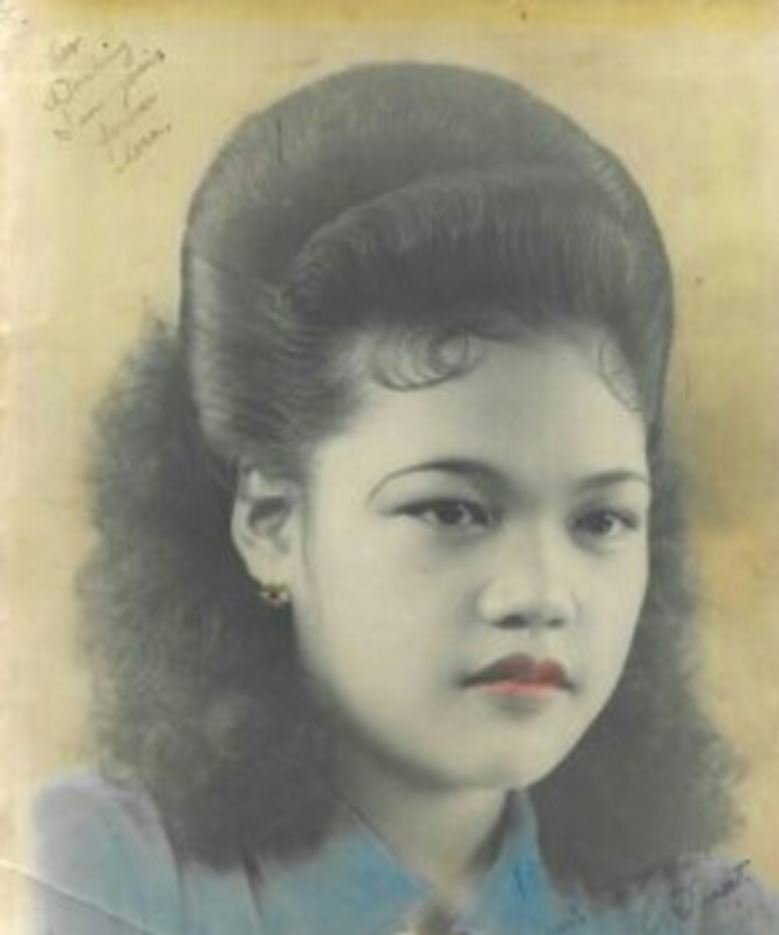 Corazon Canino Threet was born on August 25, 1930, at Fort Stotsenberg, Pampanga, Philippine Islands, to Maximo Alameres and Felisa Auguisando Canino.  She was the oldest of all the children.  She is survived by five sisters -Priscilla Canino Castro, Teresa Tolbert (Honey), Grace Billszar (Pinkee), Gloria Leyva and Rose Ortega; and four brothers, Arturo Auguisando Canino, Louie Alameres, Danny Alameres, and Arturo Alameres.
During World War II, at 16 years old and while still attending school, Corazon worked part-time as a singer and waitress at Tony's Place.  It was there at Tony's Place where Corazon met the love of her life, Leo, who was a soldier in the United States Army stationed at Clark Air Force Base, Philippine Islands. Corazon and Leo were married on October 23, 1948. Shortly, thereafter, they had their first daughter, Rose Marie, and in 1949 Leo received orders to return to the United States. Over the next 15 years, Leo remained in the military often serving duty overseas, while Corazon remained in the United States raising their children.  Unto their marriage six children were born – four daughters, Rose Marie Anderson, Marva Joe Dansby, Annette Corazon Edwards, and Erlinda Scurry; and two sons, Leo L. Threet, Jr., and Orlando Ralph Threet. They both cared for their children with unconditional love and understanding. Corazon and Leo's marriage was blessed for 68 beautiful years.
Corazon was a homemaker for 19 years. She was a very loving, kind, thoughtful and caring mother who always made sure her children studied hard in school and attended church.  She accepted Christ into her life at an early age and was a follower of the Catholic religion. She loved sewing and was a very talented self-taught seamstress, often making clothes for her daughters without the use of a store-bought pattern. Corazon was also an excellent cook. All her family and friends can attest that she made the best and most delicious lumpia, pancit, BBQ ribs, and her unique one-of-a-kind “crispy-edge” pancakes!  When the family moved to Seaside over 60 years ago, there was a group of military couples that Cora and Leo maintained lifetime friendships with – the Dorseys, Reeds, Pitts, Stallworths, and Thompsons. The wives called themselves the “Infamous 6-Rat Pack - the terror of the Monterey Peninsula!” They had many wonderful and crazy times together and would always bring in the New Year with a big bang! In 1968, Corazon became employed with the Watsonville Canning Company.  When the employees went on strike in 1985 for 19 months with the Ceaser Chavez United Farm Workers, Corazon was right there almost every day or night marching in the picket lines with her co-workers!  She retired in 1997.
For enjoyment, Corazon truly loved going to bingo with her husband, Leo, at least 5 times a week!  They were always very lucky at bingo and over the years developed many lifetime friendships with their bingo friends. On Christmas Eve 1985, Corazon won quite a substantial amount of money on a $1.00 scratch-off lottery ticket!  Corazon and Leo were very generous and always made sure they shared their winnings with family and friends. They always remembered their children and grandchildren's birthdays and generously gave gifts to each and every one of them at Christmas time. They were truly the most thoughtful and caring parents and grandparents in the world! They were an ordinary couple that did extraordinary things for their family and friends. Corazon was a huge fan of Tiger Woods, the Golden State Warriors basketball team, and had a passion for watching boxing. She was also a lifetime member of the Filipino-American Club.
Throughout her life, Corazon had a very generous heart and was supportive and loving to her entire family and friends.  In 1972, she petitioned to have her mother come live with her from the Philippine Islands.  Over the following years, both her and Leo sponsored many other family members from the PI, who lived with them for several years until they were able to live on their own. In November 1998, Corazon was reunited with her father in Sacramento, CA, whom she hadn't seen in over 50 years! Little did she know that a co-worker whom she provided transportation to work for over 18 years was the best friend of her sister Venus, one of her father's daughters through a second marriage. When Corazon was united with her father and new family, it was as though they had always known each other, and to this day remain close to each other. Corazon went home to be with the LORD on Wednesday, November 27, 2019, with several family members by her bedside. She was 89 years old. She will forever be loved and dearly missed by her family and friends. Corazon was preceded in death by her loving husband, Leo L. Threet, Sr., beloved daughter, Marva Joe Dansby, and sister Venus Ibayan.  Corazon leaves to forever cherish her memory three daughters - Rose Anderson, Annette Edwards [Jesse] and Erlinda Scurry; and two sons Leo L. Threet, Jr., [Deara] and Orlando Threet [Josephine].  Corazon was affectionately known as “Lula” by her grandchildren and great-grandchildren. She was blessed with 15 grandchildren, 23 great-grandchildren, and 8 great-great-grandchildren.

To send flowers to the family or plant a tree in memory of Corazon Threet, please visit Tribute Store

Share Your Memory of
Corazon
Upload Your Memory View All Memories
Be the first to upload a memory!
Share A Memory
Send Flowers