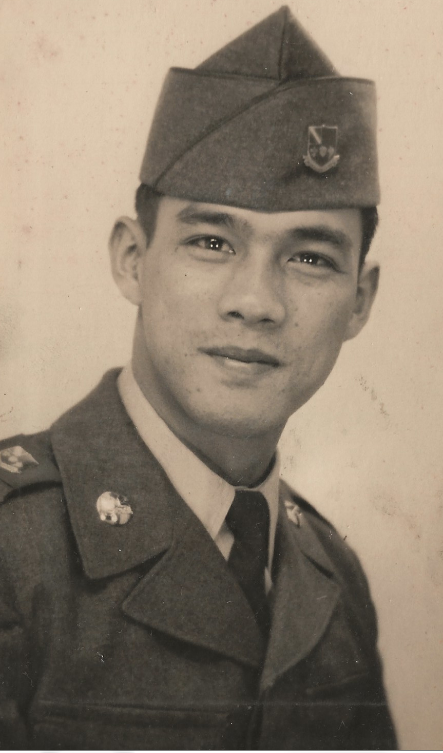 Julius David Guzman (Dave), age 89, was born in Wahiawa Oahu, Hawaii to Falisa Geronimo and Julio Guzman. As a teenager, Dave lived through Pearl Harbor which motivated him to enlist in the United States Army at 18 years old. Dave proudly served in the United States Army for 24 years with one tour in the Korean War, and two tours in the Vietnam War. He earned numerous commendations while serving, including the Air Medal, the Army Commendation, and the Bronze Star Medal for his service in Vietnam.

Dave was stationed all over the world. When in Germany, he met Elke Jünger who he married in 1958. Dave is survived by four children from this marriage: Madeleine, Lani, Jenny, and Rodney, four grandchildren, and four great grandchildren with more on the way. Dave’s last post was in Fort Ord, and he decided to put roots down on the Monterey Peninsula when he has honorably discharged from the United States Army.

Later in life, Dave met Toshiko Hawkins in Monterey, and they later married in 1981. Dave is survived by two children from this marriage: Ginger and TJ. Dave always loved to stay up to date with the goings on of his family, and he was never shy about sharing all the details with his friends.

Dave showed his love for friends and family through cooking. Every year everyone would always look forward to delivery of a batch of lumpia, wonton, char sui pork, slow simmered pineapple ham, bulgogi, smoked salmon, and much more. He has infamous for telling everyone to “go on an eat because I’ll have to throw it out”. Every year Dave would spend his Thanksgiving and Christmas Day helping Meals on Wheels serve hundreds of needy family’s meals. Anyone interested in donating in Dave’s name, please visit Meals on Wheels.

To send flowers to the family of Julius Guzman, please visit Tribute Store

Share Your Memory of
Julius
Upload Your Memory View All Memories
Be the first to upload a memory!
Share A Memory
Send Flowers