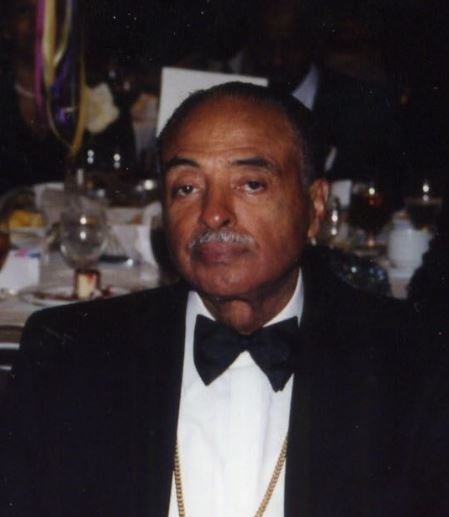 Bishop W. W. Hamilton was a man of many names.  As a child, he was known among family as “Babyson”. He was born in San Antonio Texas, the child of Bishop E. E. Hamilton and Bessie Lee Hamilton.  Despite his parents being strict disciplinarians, Babyson quickly grew into a rascal who generally did the exact opposite of what he was told and he earned his share of whippings growing up. When he was eight years old, the family moved to San Francisco, California.

Babyson attended Commerce High School in San Francisco. He was an excellent student and a good athlete. Most of all, he was still a rascal and by now, he had discovered girls. During these years, Babyson came to the altar for salvation and then fell away many times. He was called to the ministry, ordained and fell away again. But God would not take no for an answer forever.

In 1952, during the Korean War, young Wil Hamilton got a draft notice and instead of opening it, he voluntarily enlisted in the Air Force. The Air Force gave him yet another new name by dropping “n” from his first name, and recording it as “Wilbur”. From that time until he was about seventy years old, his official government name was “Wilbur”. He met and married Juanita Jefferson (now deceased) and they had three children: Sharon, Desiree and Gail.

Wilbur received his initial training at Lackland Air Force Base in Texas and he went on to be trained as a radio operator. He deployed to Japan, attached to the 43rd Bombing Squadron which flew missions over Korea. After seven months, the Air Force realized that despite being supposedly racially integrated, they had almost no Black pilots. They looked for black candidates for flight training and found one Wilbur Hamilton, whose IQ had been tested at 164. They brought him back to Columbus Air Force Base (Mississippi) where he trained as a pilot.  Again, he deployed to Japan, now as a pilot with the 43rd Air Refueling Squadron.

In 1956 Wilbur came home and resumed his education, pursuing general studies at San Francisco City College, then public policy at Simpson College, then a graduate program in urban planning at Golden Gate University and eventually a doctorate in Divinity from Simpson College. During these years, Wilbur worked at the Post Office, where he fell in love with a beautiful and sassy young woman named Joy Helena Bell. They married and had a baby girl, named Helena.

Wilbur became politically active and during a particularly contentious community meeting, Justin Herman, the Executive Director of the Redevelopment Agency, yelled “Well, if you think you can do better, why don’t you come work for me then!” Wilbur agreed and thus he joined the A2 project in San Francisco’s Western Addition. Putting his Master’s in Urban Planning to good use, Wilbur succeeded so brilliantly that he was promoted to Executive Director, managing hundreds of projects worth billions of dollars.

Still backslidden, in 1972 Wil attended a service at Perry Temple in Oakland, California where Bishop J. O. Patterson was speaking. After the message, Wil found himself at the altar, crying out to God. The wilderness years were over. He was back in fellowship with God. His wife Joy later also received Jesus Christ into her life.  The stage was set for their life of ministry to begin.  Wil picked up a yet another name when God called him to start a church called “Hamilton Memorial”: now he was “Pastor Hamilton”. Initially started in the living room of his parents’ home in San Francisco, the church grew into a thriving, vibrant assembly.

In 1980, Pastor Hamilton traveled to Victory Temple - the Seaside, California church his brother-in-law, Bishop Rudolph Martin had pastored until his death. He preached “The Comforter Has Come” not realizing that he was speaking prophetically. Bishop J.O. Patterson appointed him pastor of Victory Temple and he would indeed become “the comforter” who helped the grieving church to heal. Victory Temple had already broken ground on a new building on a hill at Broadway and Yosemite. Using his urban planning experience, Pastor Hamilton worked with the city government and in 1983, Victory Temple became “Greater Victory Temple”- no longer the little green church on Fremont, but a beautiful edifice at 1620 Broadway.

In 1987, Bishop retired from his job at the Redevelopment Agency and that year he became the jurisdictional prelate of California Northwest, which his father, Bishop E. E. Hamilton had founded in 1957. Pastor Hamilton was now Bishop Hamilton. In 1990, Bishop was elected General Secretary of the Church of God in Christ and served in that role for 10 years, helping to modernize the registration process. In 2000, Bishop Hamilton was elected to the General Board of the Church of God in Christ, and served as Secretary to the Board until he was emeritized in 2012. At about 70 years of age, Bishop Hamilton decided to reclaim his birthname of “Wilburn” (with an “n”) and from that time on, he insisted on being known as Wilburn Wyatt Hamilton.

Bishop Hamilton was known for uncompromising faithfulness to the Word of God, combined with a compassionate and loving heart for the people of God. In January 2010, Bishop lost the love of his life, the Lady Joy Helena Hamilton. Three of his children, Desiree Denise Collins, Gail Jean Hamilton and Marvyn Stanley Bell preceded him in death. All of his siblings also predeceased him: Primrose O. Martin, Ruth Ella Langston, Lucille A. Jones and Eugene E. Hamilton, Jr. Three children remain to cherish his memory: Sharon Lanear Hamilton, Sharyn Maxine Smith and Helena Joy Hamilton, along with many grandchildren, nieces and nephews, grand-nieces and grand-nephews, great grandchildren and a host of spiritual sons and daughters preaching the gospel all over the world.

To send flowers to the family or plant a tree in memory of WILBURN HAMILTON, please visit Tribute Store

Share Your Memory of
WILBURN
Upload Your Memory View All Memories
Be the first to upload a memory!
Share A Memory
Send Flowers