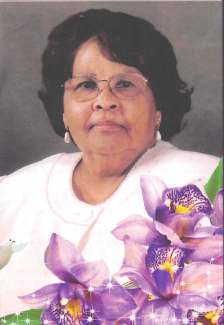 Lillian Marie (Thompson) Addison was born on October 26, 1936 in St. Landry, Parish, Opelousas, Louisiana; the fourth and youngest child of Elouise (Garrett) Thompson and Adolph Thompson. She was named after her aunt, Lila Lillian Smith, the sister of her father. Both her parents died of Tuberculosis when she was 2 years old. Shortly after her parent’s death, she and her siblings went to live with her Aunt Fannie (her father’s sister) and Uncle Mickey Ryan and their daughter, Della. Since Lillian and her siblings were still very young, they grew to know Aunt Fannie and Uncle Ryan as the only parents they had so Lillian began to call Aunt Fannie “Mama” and Uncle Ryan “Daddy”. As a youth, Lillian lived in Louisiana, Texas, Washington State and San Francisco, CA in Hunter’s Point close to a naval ship yard. Her grandmother lovingly call “Gum” also lived in her household and helped care for her and her siblings. She grew up in a Pentecostal home where she frequently read the Bible to Gum who couldn’t  read herself. Lillian had 3 children when she met and married Walter Lee Addison who also had 4 children from his previous marriage. They later moved to Seaside and three more children were added their union with a total of 10 children raised in their household. Lillian also raised her granddaughter, Naquida and had a hand in raising many of her other grandchildren as well. In 1972, Lillian began employment with the Hyatt House Hotel in Monterey. She retired from the Hyatt in 1996 to care for her grandson, Josiah. Later she held jobs as a private Nanny, retailer, and IHHC aide. Mother Lillian Addison was one of the earliest members of the Emmanuel’s COGIC. She loved church work and was an avid fundraiser for Emmanuel’s building fund. She was active in Sunday School as a teacher for the women’s class. She was also a member of the Mother’s Board and often represented them In the district as a theme speaker. She served as Assistant Church Mother under Mother Johnnie Bennett and Mother Sarah King until she became ill. Mother Addison remained a faithful member of Emmanuel and cherished her ties to the church even when she was no longer able to physically attend.

To send flowers to the family or plant a tree in memory of Lillian Addison, please visit Tribute Store

Share Your Memory of
Lillian
Upload Your Memory View All Memories
Be the first to upload a memory!
Share A Memory
Send Flowers