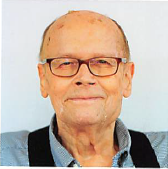 John Herzog died on February 11 at the age of 80.
He was born in Mart, Texas on December 22, 1938 to the Reverend John L. Herzog and his wife Ruth Ude Herzog. John grew up in a series of Missouri Synod Lutheran parishes in Texas and started playing the organ and piano for church services at an early age.
John graduated from high school and entered the University of Chicago at the age of 15. While he did not complete a degree there, he made many friends and developed an appreciation for diverse populations that stayed with him all his life.
He went on to receive a Bachelor's degree in music at the University of Texas at Austin where he also served as an accompanist for ballet classes in the drama department and at the Austin Ballet Academy.
Later, John earned a second Bachelor's degree from the erstwhile Monterey Institute of International Studies. This degree was in Spanish, a subject he explored , first, at the National Autonomous University of Mexico campus in San Antonio, Texas; then at Pacific Grove Adult School; and at Monterey Peninsula College, where he acquired a scholarship to MIIS.
He benefited from Italian classes at the Adult School and MPC, as well as jazz improvisation and adapted physical education at the community college. (Sometimes, he found ways to merge these two disciplines.)
For several years, John played for services at Faith Lutheran Church in Seaside and,also, provided music for two chapels at the former Fort Ord.
John met his wife, Martha, at UT. They married on April 15, 1963, and lived in Austin and San Antonio until 1977 when she took a position at the Defense Language Institute Foreign Language Center. For the last thirty years, they have lived at their current residence in Pacific Grove.
In addition to his wife, John is survived by his sister Lois and her husband Warren Paul of Pensacola, Florida; their children and grandchildren; and by his brothers Richard and Philip of Austin.
John's health required that he spend his last two and one-half years at the Carmel Hills Care Center. The good care he received from the staff and the camaraderie he received from the residents were at least partially repaid by the lively songs he provided to everyone.

On February   24 at 2 pm., there will be a memorial service for John at Bethlehem Lutheran Church, 800 Cass in Monterey.