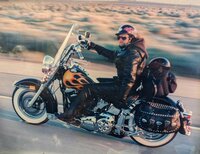 Bill was born in Pittsburg, Pennsylvania Sept 19, 1949. He was the second of five children of Evelyn and Frank Enders. The family moved to the Monterey Peninsula in the late  1950s.  Bill graduated from Seaside High School in 1968.  He was a wrestler, surfer, and motorcycle enthusiast.

He founded Bill's Monterey Custom Motorcycles in 1972, and he co-founded the Ephesians Motorcycle Club  in 1973. He has contributed much to the Monterey Peninsula, including toy runs for local families in need, fundraisers for Polly Klaas and Christina Williams, and he was a founding member The Monterey Bay Surfing Association with his brother Jerry.