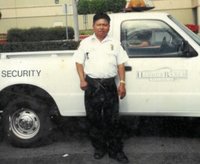 Marcelino Pascua was peacefully granted his angel wings on Monday, the 26th of October 2020 at Community Hospital Of Monterey Peninsula.

Born on April Fools 1955 in San Nicolas, Illocos Norte, Philippines where he grew up throughout his early life and settled in California where Marcelino lived a simple yet satisfying way of life. With a bit of quirkiness and his humorous jokes he brought smiles to many. He stands out especially with his own unique take on every piece of clothing he wears; from his hair style all the way to his shoes. He surely was carefree, and that was the foundation of his life, making everyone around him feel the same way.

He is survived by his wife, Pilar A. Pascua and 4 sons Phillip, John, Mike and Marc. He was a beloved Grandfather to 7 grandchildren. He also has 4 sisters Lolita, Benjamina, Marita (deceased) and Teresita, as well as 3 brothers Ronaldo, Fidelino (deceased) and Belon.