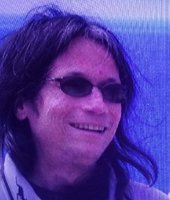 Steven Thomas Calderone, also known as “Beeko” to his close friends passed away on August 11th 2020 at the age of 61. Born on September 1st, 1958 in Shirley, Massachusetts, Steven enjoyed the privilege of living in many states and countries as a military dependent which fueled his interest in history, literature, art and music. He became a trivia information buff on many topics. He was a creative soul with a passion for writing beautiful poetry and creating music with a fan following. He had a great appreciation for music artists and enjoyed attending concerts with friends. Steven joined the United States Air Force briefly and received an Honorable Discharge due to health issues. He worked as a sales person for a short time. Although he had chronic health issues Steven was able to take that experience and express his journey in creative poetry and music. Steven was preceded in death by his father, Eugene Thomas Calderone. He is survived by his mother, Hiroko Calderone; Sister, Mary Rigmaiden (David); Sister, Ruth Hudock; Sister, Linda Calderone; Nephew, Sean Rigmaiden; Nephew, Daniel Rigmaiden. A private Celebration of Life will be held at a future date. Steven loved animals and any donation in his memory can be made to the Monterey County SPCA. Steven was a gentle soul who will be truly missed by those who knew and loved him.