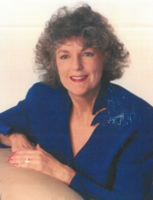 She attended and graduated for Santa Barbara college of Nursing.

She accepted a nursing job in a doctor’s office in Berkley, CA.

The end of March 1959 she met David Lane, Bishopville, S.C. and after a brief courtship, they married.

They left for Atlanta, GA. Where Lt. Lane was assigned.

Lt. Col and Mrs.Lane served many assignments from Fairbanks Alaska, Bangkok Thailand, Camp Darby Italy, and back to California.

Claudia served on many military wives clubs and was Vice Club President at Rock Island Arsenal in Illinois.

In the mean time she produced two daughters one born in Atlanta Ga. And the other daughter was born in Fairbanks Alaska.

Claudia was a loving wife and mother and she will rest on her beloved Monterey Peninsula.

Dave and Claudia were married for 59+ wonderful years.

A burial service will be held on December the 7th beginning at 10:00 am at Mission Memorial Park & Seaside Funeral Home 1915 Ord Grove Ave, Seaside CA.